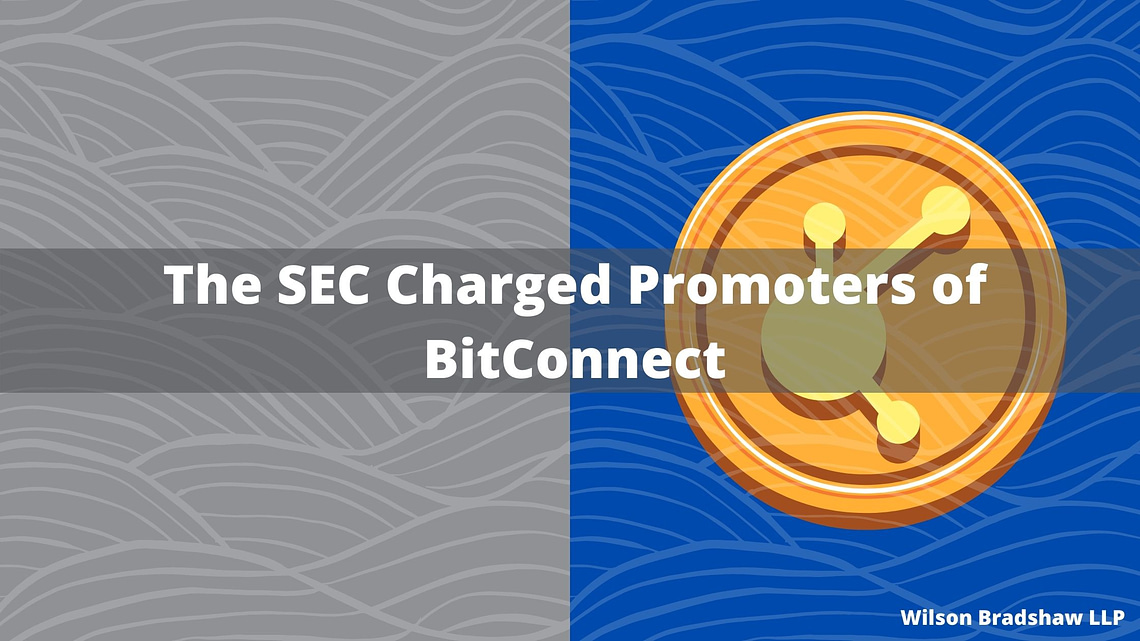 The SEC Charged Promoters of BitConnect.  On May 28th, 2021, the Securities and Exchange Commission (“SEC”) announced[2] its charge against five individuals with promoting a global unregistered digital asset security offering in 2017 and 2018. The five defendants, Trevon Brown, Craig Grant, Ryan Maasen, Michael Noble, and Joshua Jeppesen, belonged to a promoter network working for BitConnect, an unincorporated organization founded by an Indian citizen. BitConnect raised over $2 billion dollars from individual investors during the relevant period and awarded defendants several million dollars for their soliciting investors. By bringing charges against the defendants, the SEC seeks injunctive relief, disgorgement of the ill-gotten plus prejudged interest, and civil penalties.

The SEC’s complaint[2] claimed that BitConnect issued 5 million BitConnect Coin (BCC) in its 2016 ICO. BitConnect purportedly claims BCC to be “an open-source, peer-to-peer community-driven decentralized cryptocurrency.” BitConnect also launched an online trading platform where traders can exchange BCC and Bitcoin for one another. In early 2017, BitConnect solicited investors to lend money to BitConnect by creating an impression that they can profit from these lendings. According to BitConnect’s websites, Bitconnect can generate up to 40% profit per month with no risk by tracking the volatility between Bitcoin and U.S. dollar. It also presents a historical returns chart, which depicted an all-positive return on any given day.

To participate in the lending program, the investors must create a virtual account on BitConnect’s website and wired BitConnect an amount of money in Bitcoins. Bitconnect’s website then shows Bitcoins in investors’ virtual accounts that can be traded into BCC at its trading platform. Investors then “lend” these BCC to BitConnect, expecting an unusually high return. However, Bitconnect never registered these “lending programs” with the SEC nor satisfied the exemption condition.

BitConnect developed a “Referral Program” to bring more investors into its fraudulent scheme. It offered opportunities to earn additional rewards to investors who convince other investors to invest in BitConnect’s lending programs. Investors also get rewarded for second and even third-tier recruitment. The reward ranged first from 7% (first-tier) to 0.2%(seventh-tier) and later from 5% (first-tier) to 2%(third-tier) of the total amount of the recruited investments.

The five defendants also held or participated in multiple BitConnect promotional events in the U.S., Thailand, and Dubai, during which they gave presented BitConnect’s lending programs to be a safe and rewarding opportunity. They also recorded videos and posted them on social media, including YouTube, to advertise BitConnect’s lending programs. The material presented in events and videos was designed to give the impression that the lending programs are rewarding and risk-free. In return, Brown received at least $480,000, Grant over $1.3 million, Maasen over $475,000, and Noble over $730,000 as “referral commissions” and “development funds from BitConnect, while Jeppesen received over $2.6 million and transferred over $500,000 to his fiancée.

BitConnect’s scheme ended in 2018 when the Texas State Securities Board issued a cease-and-desist order on January 4th, followed by California 5 days later. A week later, BitConnect closed the lending programs on January 16th, 2018, and BCC’s values dropped over 92%. In the following week, the customers cannot access BitConnect’s website, and when they finally did, they found their BCC to be almost worthless. Their money almost evaporated.

Lara Shalov Mehraban from the SEC says, “[w]e allege that these defendants unlawfully sold unregistered digital asset securities by actively promoting the BitConnect lending program to retail investors…[w]e will seek to hold accountable those who illegally profit by capitalizing on the public’s interest in digital assets.”

BCC lending programs are considered securities because they presented an attractive return rate to the investors. Congress broadly defined securities as “instruments, schemes, or transactions through which a person invests money in a common enterprise and reasonably expects profits or returns derived from the entrepreneurial or managerial efforts of others.” Therefore, BBC lending programs constitute security offerings and are thus subject to related regulation.

In this case, the defendants violated Sections 5(a) and 5(c) of the Securities Act of 1933, which requires issuers to register with the SEC before issuing securities to the public. The defendants also violated section 15(a) of the Securities Exchange Act of 1934, which requires securities brokers to register with the SEC. These clauses are critical in protecting investors’ interests and maintaining a healthy market. Failing to comply may lead to severe legal consequences.