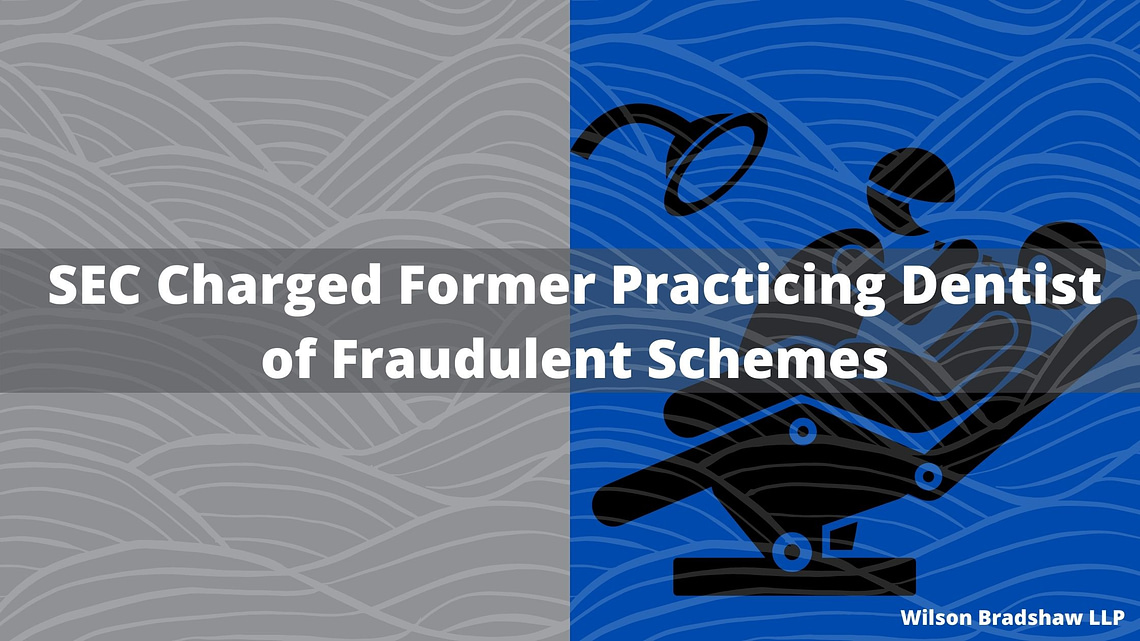 On June 11th, 2021, the Securities and Exchange Commission (“SEC”) announce[1] the charge against Radjabli for orchestrating three individual fraudulent schemes.  The amount of money involved in each scheme increased as Radjabli went further. For example, in his third scheme, he took advantage of being a former practicing dentist and unlawfully raised approximately $20 million through My Doctor Loan, LLC, an entity he created solely for that purpose. Radjabli agreed to pay $600,000 to settle the charges without admitting or denying them, but the settlement is still subject to the court’s approval.

The SEC claimed in the complaint[2] that despite holding a Series 3 Future License from National Future Association, Radjabli does not hold a license from the SEC. In addition, the Apis Capital Management, LLC(“Apis Capital”)  that he created in 2017 to manage his schemes is also unregistered with the SEC as an investment advisor or in any capacity. He also created My Doctor Loan, LLC, a limited liability company that allegedly provides financing for healthcare professionals.

In the first scheme, Radjabli offered Apis Token, a digital asset representing a non-voting interest at a fund primarily owned by Radjabli and his families, to accredited investors and foreign investors. The offer turned out to be unattractive, and no one bought any token from Radjabli. However, Radjabli issued a press release through Apis Capital on June 4th, 2018, in which he falsely claimed that “[s]o far, Apis Token has raised $1.7MM”. Two days later, in an interview with Tech Company News, he reaffirmed that Apis token had raised $1.7 million, “and the funds raised are already deployed, potentially earning profits in June.” Radjabli then posted this interview on Apis Capital’s website. Both the interview and the press release contain misleading information about the amount of money that has been raised. Even after Radjabli posted these materials, only $36,000 investment was made to purchase Apis Token.

In the second scheme, Radjabli manipulated Veritone’s stock price and illicitly profited from it. Radjabli privately contacted Veritone’s CEO on December 4th, 2020, and stated that Apis is planning to acquire Veritone for $8 per share in cash. Six days later, Radjabli caused Apis capital to issue a press release and filed Schedules TO-C and 13D with the Commission. In the Schedule TO-C, he increased the offer price to $10.26 per share, an 82% premium to Veritone’s current price, resulting in a total cost of approximately $200 million. Radjabli filed 13D to bolster his offer’s credibility. As 13D is usually required when the group acquires beneficial ownership of more than 5% of a voting class of a company’s stock, Radjabli claimed to hold 5.03% of Veritone’s share when, in reality, Apis capital had only 4.6% of the share.

Radjabli also assured investors of the proposed acquisition’s legitimacy by retaining an international law firm and an investment bank. He lied to them about his financial status, claiming that he has had enough capital to complete the acquisition. He told the law firm that he had $570 million and to the investment bank $800 million when Radjabli knows that he had control over only $10,000 then and has no reasonable expectation of obtaining enough capital for the acquisition.

The truth is, Radjabli did not intend to acquire Veritone in the first place, and he soon withdrew the offer. The false impression he created to the public caused Veritone’s price to soar 40% after his announcement. Radjabli then sold most of his share at Veritone and purchased put options for Veritone’s stock, resulting in an ill-gained profit of over $160,000.

In the third scheme, Radjabli caused Loan Doctor to raised $19.95 million for HCF High Yield CD Account (the “HCF CD”), an unregistered fund that allegedly provides low-risk, short-term financing to healthcare professionals, promising a 6% annual return. Radjabli also claimed the fund to be backed by over $100 million cash equivalent funds and FDIC insurance. Radjabli spread this information via multiple social media, google advertisements, and direct emails to interested investors. For example, he created an account on Reddit.com, mbarry15, responding to a message questioning HCF CD to be a scam that he had invested $20,000 and “got the withdrawal no problem.” Furthermore, Radjabli fabricated a fictitious CFO for Loan Doctor named Isika Rostova, who purportedly worked at two investment banks before joining Loan Doctor.

However, both investment banks confirmed that they did not employ anyone named Rostova, and HCF CD was not backed by any cash or FDIC insurance, nor did it provide short-term lending to medical professionals as it claimed to do. Instead, Radjabli used the capital collected to make risky loans to digital asset lending companies without cash backups, including lending $1.79 million to his own company Apis Capital.

Although Radjabli reimbursed all his investors with the 6% promised interest, his conduct constituted fraud. Reasonable investors would want to know how their money is invested to evaluate the risk. Radjabli knew his misrepresentation of material information could confuse his investor’s judgment. Because of the three schemes described above, Radjabli and Apis Capital violated Sections 5(a), 5(c), and 17(a) of the Securities Act of 1933 and Sections 10(b), and 14(e) of the Securities Exchange Act of 1934.

Kristina Littman from the SEC says, “[a]s the SEC alleges, Mr. Radjabli engaged in serial securities fraud that has no place in our markets…[t]oday’s resolution includes important relief to protect investors from further harm.”