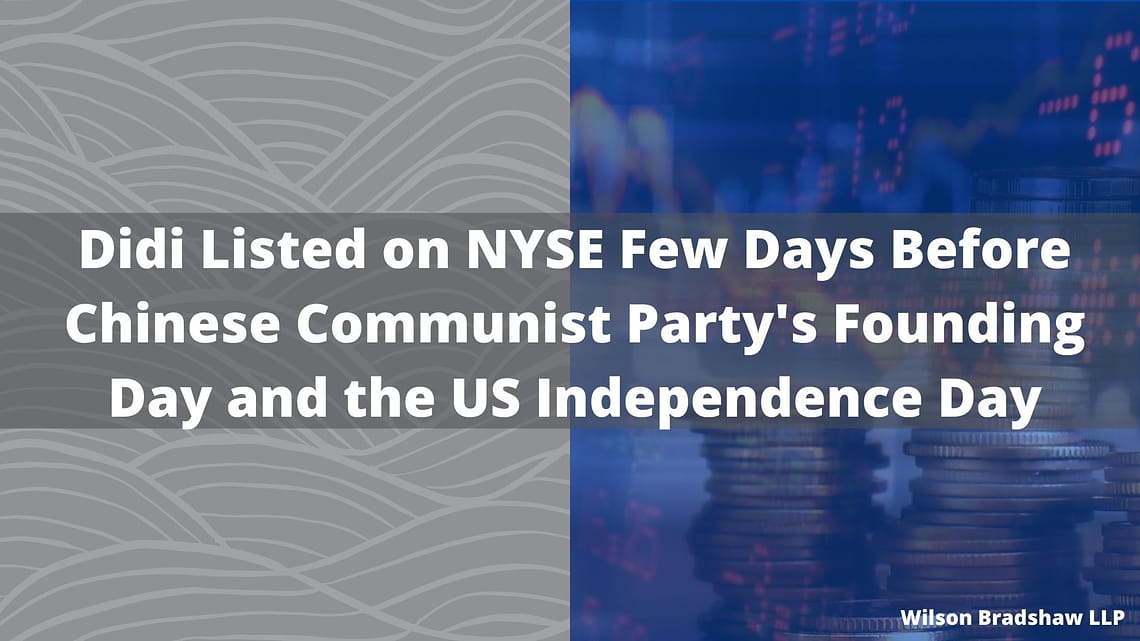 Didi Inc., a Chinese version of Uber, was listed on NYSE (DIDI) on June 30, the day before the Chinese Communist Party’s Founding Day celebration and four days before the United States’ Independence Day. Didi planned to raise approximately $4.4 to $4.9 billion from its IPO, offering 318,000,000 ADSs[1] priced at $14 per share. The offered pricing gave Didi a valuation of around $76 billion, and its current stock price closed last Friday, July 2, 2021, at $15.37, quickly lifting its valuation to over $80 billion, making Didi the runner up to U.S. ride-hailing technology firm Uber (valued at $95 billion) but well ahead of Lyft (valued at $20 billion).

Didi, whose predecessor Xiaoju Technology Co., Ltd. was founded in 2012, has grown tremendously in the past couple of years. Its founder and CEO Wei Cheng said that DiDi was founded from his personal experience of not being able to find a taxi on a rainy evening. He found that while China was becoming more urbanized, the residents still did not own a car unlike the residents in the US. His hopes of helping more people avoid trouble finding a ride around China worked. The market was promising for ride-hailing platforms, allowing for rapid growth of Cheng’s business. In 2015, three years after the launch the taxi-hailing platform and a year after the ride-hailing platform, Didi acquired its domestic competitor in China, Kuaidi, to expand its control of the Chinese market. In 2016, after an arduous price war, Didi acquired Uber China, dominating the Chinese market. As Didi started its overseas business, it completed the acquisition of Brazilian ride-hailing company 99 Taxis in 2018, after investigating and purchasing its stock from August 2017.

Didi has become the largest platform by annual active users and by average daily transactions, according to CIC. Didi claimed in its 424B4[2] that in the last months ending in March 2021, it had 377 million annual active users and 13 million active drivers in over 4000 cities of 17 countries. Its average daily transactions increased from 1.8 million in March 2019 to 4.6 million in March 2021 (a CARG[3] of 58.9%) outside of China and 23 million to 60 million inside China.

Didi also recovered quickly from last year’s pandemic that its revenue started to rise again after the second quarter of 2020 when Covid-19 in the US still rendered Uber handicapped. Didi made revenue of RMB141.7 billion (US$21.6 billion) in 2020, and a net loss of RMB10.6 billion (US$1.6billion), compared to Uber’s annual revenue[4] of $11.14 billion and a net loss of $6.77 billion. Didi also turned the balance in the first three months of 2021, generating a net income of US $0.8 billion.

Didi’s success partly could be attributed to its emphasis on drivers’ and passengers’ safety. After two tragic safety incidents occurred on its Hitch platform in 2018, Didi introduced a stringent background check for drivers, where drivers must pass a safety test before becoming a driver. Simultaneously, Didi was also developing its autonomous driving and shared mobility platform, staying aggressive to the growing ride-hailing and related markets in Chinese second-tier and third-tier cities. It is estimated that the Chinese urbanization rate will be over 70% in 2030. The population density and new urban life that promotes consumption is expected to increase the demand for Didi’s services.

Didi announced the allocation of one-third of the shares[5] offered in advance to promote its IPO, and that Morgan Stanley Investment Management and Temasek Holdings Ltd is planning to purchase $1.25 billion of the shares. Didi also selected experienced underwriters to foster its IPO, led by Goldman Sachs LLC, Morgan Stanley & Co. LLC, and JP Morgan Securities LLC. Didi planned to spend 30% of the money raised on technology capacities, including developing shared mobility, electric vehicles, autonomous driving technologies, 30% on foreign market development, and 20% on current customers, leaving the remaining 20% flexible.

Despite its success, Didi is facing some challenges with its drivers. A potential defect Didi faces is its drivers’ accumulating grievances. While its safety requirement certainly lowers the risk of security accidents, impatience is growing among the drivers. Multiplerivers feel that it is annoying to them to watch safety training lectures repeatedly, especially when they are on a freeway without a place to stop their cars.

Many drivers do not believe they are receiving enough compensation for their work. A DiDi driver from Beijing shared “I must start getting passengers around the city from 7:00 am to 11:00 pm, and sometimes I can’t go to sleep until midnight, but on average, I make only RMB400 ($60) a day”. Assuming a driver takes two days off per week (which is unlikely), his income is only slightly above Beijing’s (including the countryside) average income (about RMB6900 per month). Considering their 15 hours workload per day, it is not hard to see why drivers are dissatisfied.

What made Didi stand out from other ride-hailing companies is its policy of reimbursing drivers’ fines the Chinese government charged for illegally running a taxi service. The Chinese government’s attitude toward ride-hailing platforms is very ambiguous. On one hand, it allows platforms like Didi to exist and run their business, but on the other hand, it charges heavy fines (starting from RMB12,000 in Beijing) for drivers caught working for these platforms. Didi is the only Chinese platform that reimburses its contract drivers if they were caught.

The biggest challenge to Didi’s survival is the Chinese government. Four days after Didi’s IPO in the US, the Chinese national internet office announced its charge against Didi for abusing customers’ information. As the investigation began, the internet office planned to remove Didi from mobile apps stores and restrict new users from registration. Because of this, Didi’s plan of further expansion in China is likely to be suspended.

The Chinese government implemented a series of stringent regulations on Chinese companies receiving foreign investments, especially those doing business in the telecommunication industry (such as Didi) and other sensitive industries listed on the Chinese Minister of Commerce’s (MOFCOM) negative list. Usually, companies in the restrictive industries are only allowed to have a limited portion of their shares held by foreign investors, if not entirely prohibited.

The most common way of circumventing such regulation is by setting up a VIE (variable interest entities) structure. VIE[6] allows investors to control an operating entity without directly holding its voting powers, instead the investors hold powers through a series of agreements (VIE agreements, usually including a loan agreement, an exclusive call options agreement, a proxy agreement, an equity pledge agreement, and other relating agreements case by case). In other words, it provides the power to control without nominal ownership. The general VIE structure usually establishes a global holding company registered in the Cayman Islands for its favorable taxing policies. The holding company then establishes a shell company in Hongkong and a WFOE (wholly foreign-owned entity) in China and uses the WFOE to control the operating company in China through VIE agreements.

Multiple Chinese companies have successfully gone public in the US, but VIE remains a gray area in Chinese regulation. In addition, setting up a VIE structure usually involves complicated legal issues. Establishing a WFOE in China, complying with Chinese laws, and carefully drafting VIE agreements are all challenging tasks. If you plan on using the VIE structure, you will need professional legal assistance, seek a merger or acquisition involving a company with a VIE structure, or be presented with an opportunity to invest in a firm with a VIE structure.