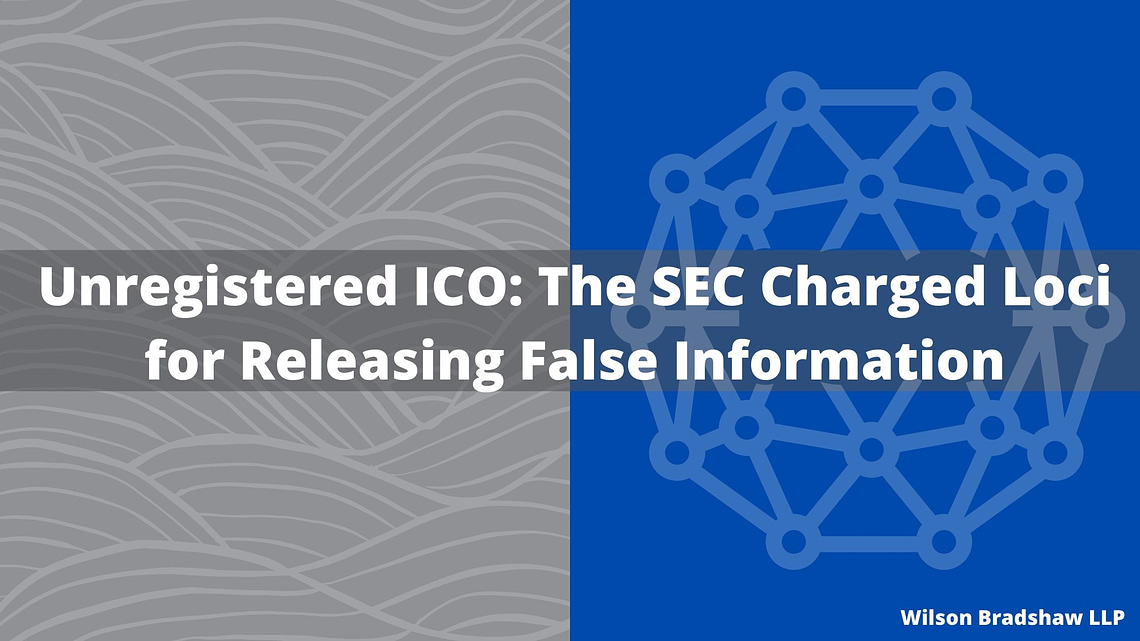 On June 22, 2021, the Securities and Exchange Commission (“SEC”) charged[1] Loci Inc. (“Loci”) and its CEO John Wise for raising over $7.6 million from an unregistered Initial Coin Offering (ICO) of LOCIcoin. Among the capital raised from the ICO, Loci illicitly misappropriated approximately $38,000 for his personal use. The defendants also violated the antifraud provision of the Security Law when they released materially false information about Loci’s scope. The defendants agreed to settle the charge by destroying the remaining tokens they held, suspending trade, releasing the SEC’s report on its social platforms, and paying a $7.7 million penalty.

The SEC claimed in the complaint[2] that Wise founded Loci in 2016 and developed a software platform, InnVenn, to provide an IP search service. Loci expected to generate revenue by collecting subscription fees from its users, but until the ICO in 2017 and 2018, the service remained free because of its limited functionality. Loci and Wise planned to use the funds raised from ICO to update InnVenn’s services and turn it into a paid service accepting only LOCIcoin as payments. However, InnVenn continuously accepts USD or LOCIcoin as payments after the ICO.

The SEC pointed out that Loci offered LOCIcoin in four rounds, priced from $0.33 to $0.75 per coin while Loci repeatedly told investors that LOCIcoin would have a minimum value of $2.49 per coin after the ICO. The projection was based on Loci’s subscription fee for using InnVenn, $250 in USD or 100 LOCIcoin. The SEC believed that an investor would expect to profit from the difference of LOCIcoin’s price in its ICO and its purported value after the ICO. The offering of LOCIcoin is under the SEC’s jurisdiction and must comply with the related registering rules.

Loci and Wise spread materially false information during the ICO to promote the sale of LOCIcoin. They claimed that LOCIcoin was the only option of payment for InnVenn, and until the ICO, no user had paid any subscription fees. Loci provided no reasonable base that the number of customers would be large enough to boast LOCIcoin to the purported $2.49. In addition, they startlingly overstated the size of the company and revenue.

Loci sent whitepapers to prospective investors stating that the revenue in Q2 2017 was $100,000 and would grow to over $1 million by the end of the year, generated from over 6,000 paid users. However, until the ICO, Lucid never had paid users, so the projection was completely baseless.

Loci and Wise misrepresented the number of employees it had to various social media, including Wallstreet Business Journal (“WBJ”), knowing that investors may resort to information published on WBJ when making decisions. To do this, Wise told WBJ that Loci had “45 dedicated workers with dozens more contractors” when, in fact, Loci had no formal employees until the ICO. Loci also told investors that a non-profit foundation, Loci Nexus, would be responsible for the entire ICO and retain 34% of the issued LOCIcoins to facilitate coin liquidity. The truth was, Loci Nexus did not exist, and Loci handled the entire offering.

“Loci and its CEO misled investors regarding critical aspects of Loci’s business,” said Kristina Littman, Chief of the SEC Enforcement Division’s Cyber Unit.  “Investors in digital asset securities are entitled to truthful information and fulsome disclosures so they can make informed investment decisions.”

Loci and Wise willfully orchestrated an unregistered security offering and provided false information to investors. Although LOCIcoin is not a traditional type of securities, it was still subject to the SEC’s regulations. Loci and Wise should have known that the false information they provide may cause investors to make irrational decisions that jeopardize their interests. Therefore, the defendants violated Section 17(a) of the Security Act and Section 10(b) of the Exchange Act.