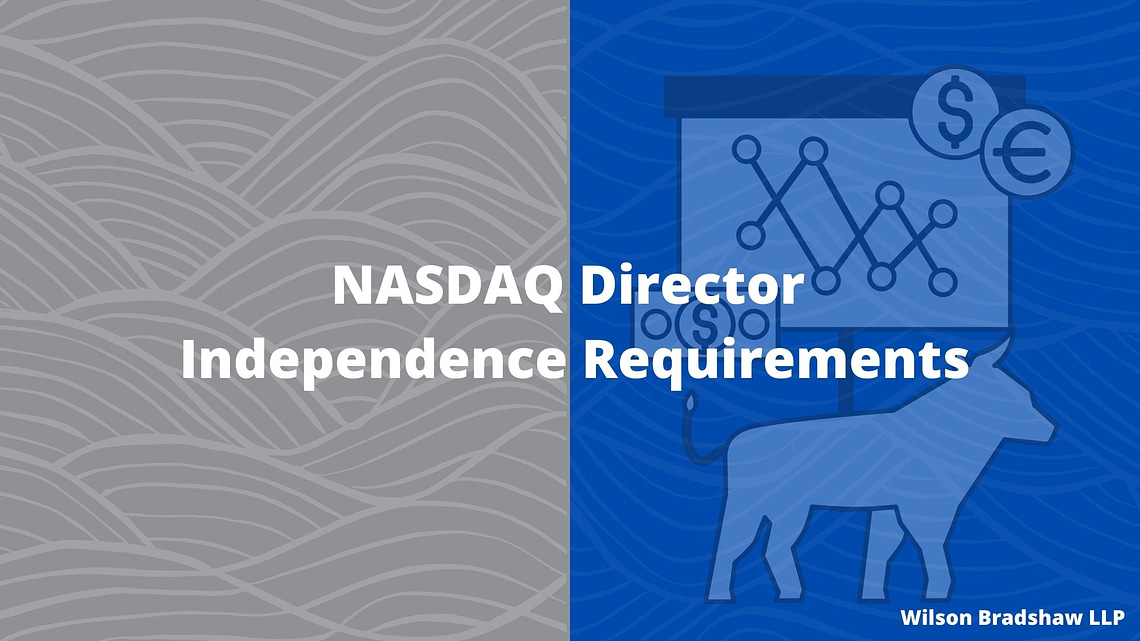 The Nasdaq Stock Market requires its listed companies to meet certain standards that help ensure investor confidence in the listed companies.  These requirements are intended to promote transparency, company prosperity, shareholder value, access to the capital markets, and overall market stability.  They are also intended to guard against conflicts of interest, reduce fraud among public companies, facilitate uniform application of the rules, and ease administration.  Among other requirements, the Nasdaq, under Rule 5605(b)(1), requires its listed companies to have a board of directors comprised of a majority of independent directors.  It is important for investors to have confidence that individuals serving as independent directors do not have a relationship with the listed company that would impair their independence.  This memorandum will outline the requirements for director independence and the consequences of noncompliance.

Rule 5605(b) – Majority Independent Board

Rule 5605(b)(1) provides that “[a] majority of the board of directors must be comprised of Independent Directors as defined in Rule 5605(a)(2). The Company, other than a Foreign Private Issuer, must comply with the disclosure requirements set forth in Item 407(a) of Regulation S-K. A Foreign Private Issuer must disclose in its next annual report (e.g., Form 20-F or 40-F) those directors that the board of directors has determined to be independent under Rule 5605(a)(2).”  If a company fails to comply with the requirement under 5605(b)(1) due to a vacancy or due to circumstances beyond a director’s control, the company must regain compliance by the earlier of (i) its next annual shareholder’s meeting or (ii) one year from the occurrence of the event that caused the failure to comply with this requirement.  However, if the annual shareholders meeting occurs no later than 180 days following the event that caused the failure to comply with this requirement, the Company shall instead have 180 days from such event to regain compliance.  A company relying on this provision must provide notice to Nasdaq immediately upon learning of the event that caused the noncompliance.  Rule 5605(b) was adopted on March 12, 2009.

“a person other than an Executive Officer or employee of the Company or any other individual having a relationship which, in the opinion of the Company’s board of directors, would interfere with the exercise of independent judgment in carrying out the responsibilities of a director. For purposes of this rule, “Family Member” means a person’s spouse, parents, children, siblings, mothers and fathers-in-law, sons and daughters-in-law, brothers and sisters-in-law, and anyone (other than domestic employees) who shares such person’s home.”

The following persons would be considered not independent:

Example of a Potential Director Conflict

For companies listed on the Nasdaq Stock Market, there are consequences for non-compliance with the continued listing standards.  The basic process is as follows:

In general, on each trading day, Nasdaq will publish a list of companies that are non-compliant with the Nasdaq continued listing standards.  Typically, a company is added to the list five business days after Nasdaq notifies the company about its noncompliance and is removed from the list one business day after Nasdaq determines that the company has regained compliance or no longer trades on Nasdaq.  Non-compliance with listing standards, even temporarily, will almost certainly affect the market value of a listed company’s stock.