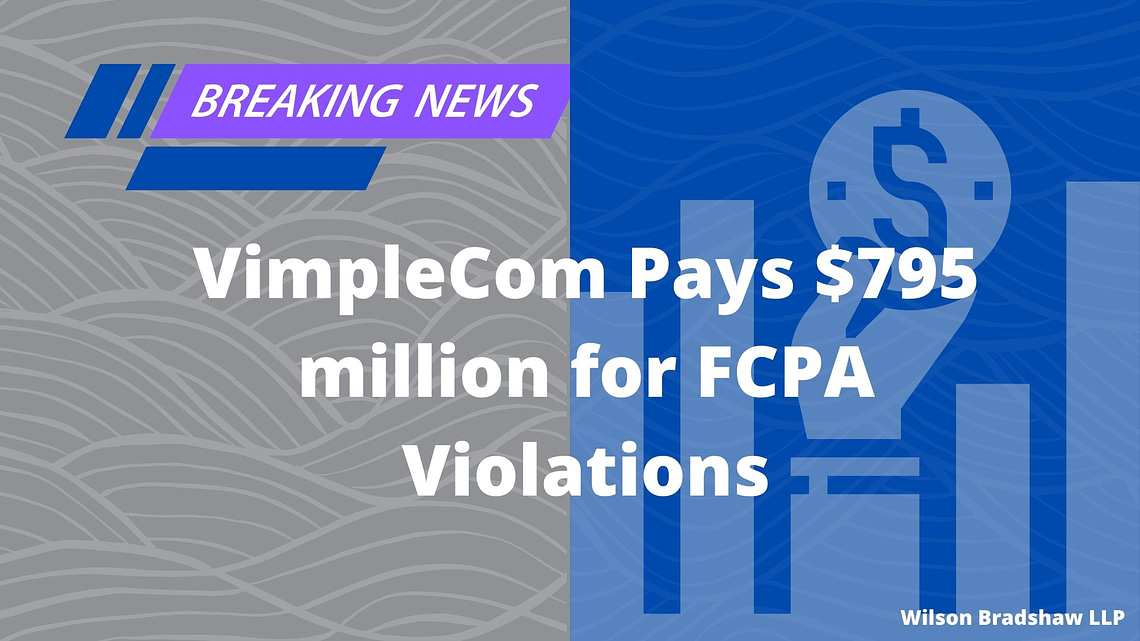 Specifically, the anti-bribery provisions of the FCPA prohibit the willful use of the mails or any means of instrumentality of interstate commerce corruptly in furtherance of any offer, payment, promise to pay, or authorization of the payment of money or anything of value to any person, while knowing that all or a portion of such money or thing of value will be offered, given or promised, directly or indirectly, to a foreign official to influence the foreign official in his or her official capacity, induce the foreign official to do or omit to do an act in violation of his or her lawful duty, or to secure any improper advantage in order to assist in obtaining or retaining business for or with, or directing business to, any person.

The SEC alleged that VimpelCom, a Russian mobile phone operator, paid hundreds of millions of dollars in bribes to an Uzbek official to secure wireless licenses.  FCPA violations can be nasty.  For instance, last year, the former CEO of VimpelCom was arrested by Norwegian government officials.

The SEC received $167.5 million, the Department of Justice received $230.1 million, and the Dutch regulators received $397.5 million.

Consider this: VimpelCom’s CEO was arrested, and was investigated by the DOJ, the SEC, and Dutch regulators.  That’s at least three law firms in two different countries PLUS legal defense costs in Russia.  Also, these investigations take major time away from operating a business.

Consider what is happening to Petrobras, a Brazilian state-run oil company, who might need to pay $1.6 billion or more to U.S. authorities for FCPA and other violations. More than 100 Petrobras officials have been indicted in Brazil over this corruption scandal.

Petrobras’ ultimate settlement might beat the record $800 million that German company Siemens AG paid to the U.S. in 2008, which is the largest penalty ever disgorged for FCPA violations.

If you have been engaging in potential FCPA violations, call the Bradshaw Law Group immediately to mitigate your risk.

VimpelCom to Pay $795 Million in Global Settlement for FCPA Violations

Washington D.C., Feb. 18, 2016 —The Securities and Exchange Commission today announced a global settlement along with the U.S. Department of Justice and Dutch regulators that requires telecommunications provider VimpelCom Ltd. to pay more than $795 million to resolve its violations of the Foreign Corrupt Practices Act (FCPA) to win business in Uzbekistan.

The SEC alleges that VimpelCom offered and paid bribes to an Uzbek government official related to the President of Uzbekistan as the company entered the Uzbek telecommunications market and sought government-issued licenses, frequencies, channels, and number blocks.  At least $114 million in bribe payments were funneled through an entity affiliated with the Uzbek official, and approximately a half-million dollars in bribes were disguised as charitable donations made to charities directly affiliated with the Uzbek official.

“VimpelCom made massive revenues in Uzbekistan by paying over $100 million to an official with significant influence over top leaders of the Uzbek government,” said Andrew J. Ceresney, Director of the SEC Enforcement Division.  “These old-fashioned bribes, hidden through sham contracts and charitable contributions, left the company’s books and records riddled with inaccuracies.”

The settlement requires VimpelCom to pay $167.5 million to the SEC, $230.1 million to the U.S. Department of Justice, and $397.5 million to Dutch regulators.  The company must retain an independent corporate monitor for at least three years.

“International cooperation among regulators is critical to holding companies responsible for all facets of a bribery scheme.  This closely coordinated settlement is a product of the extraordinary efforts of the SEC, Department of Justice, and law enforcement partners around the globe to jointly pursue those who break the law to win business,” said Kara N. Brockmeyer, Chief of the SEC Enforcement Division’s FCPA Unit.

The SEC’s complaint was filed in U.S. District Court for the Southern District of New York.  VimpelCom consented to the entry of a court order ordering the company to pay disgorgement and retain an independent monitor, and permanently enjoining the company from future violations of Sections 30A, 13(b)(2)(A), and 13(b)(2)(B) of the Securities Exchange Act of 1934.