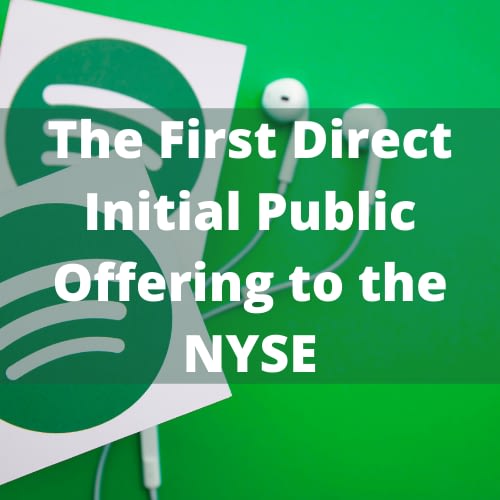 Initial Public Offering and Spotify.  The giant music streaming service from Sweden began public trading its shares on the New York Stock Exchange (NYSE) in April 2018. Not by the traditional route, though.

In an initial public offering (IPO) a company would enlist the services of banks to prepare the required documents. Convince selected investors of the value of the company, set an offering price, and buy or sell shares during the initial selling. This is to keep prices steady.

The IPO process for a company to go public is usually expensive and can take a long time because the banks have lots of work to do, for which they are well paid.

Spotify, however, chose to go the route of a direct public offering, a process typically used by small companies who cannot afford the high cost of an IPO.  Under that process the company sells its own existing shares and eliminates the services of the banks.  There is no dilution of the value of the shares because no new shares are issued.  It is a shorter process and less expensive.

However, without the assurances of the banks to maintain a steady price of the shares, a direct public offering runs the risk of a discount in the price of the shares, which can be caused by heavy trading.  Spotify, though, can reduce that risk by approaching existing investors and negotiating lock-up periods, to restrict the supply of shares on the market.  According to the Wall Street Journal, Spotify “is expected to use private market trading to guide investors towards a public market stock price.”

The question arises as to why Spotify chose the direct public offering.  The company’s cash flow is positive and it has unlimited access to capital, with a worldwide brand and 70 million subscription users.  The company was valued at $19 billion last December.  Also, the company is known and understood worldwide, so it did not need the help of bankers to convince investors of its value.  Spotify said it chose the direct public offering route because it can “list without selling shares”, it “offers liquidity to shareholders, and would provide equal access to buyers and sellers.  It also wanted the process to be transparent and allow the market to set the price of the shares.”

With all that said, the bottom line is still that the direct public offering is always less expensive than the traditional route of an IPO.

According to a NYSE spokesman, Spotify will be the “very first NYSE direct listing” of a foreign company.  It is unlikely that many other companies will go the same route as Spotify because they don’t have all the same unique attributes.  However, there is speculation that maybe the market, which hasn’t seen many changes in a long time, is ready for some kind of disruption.  More direct public offerings could be what’s next.

The law firm of Bradshaw Law Group routinely assists companies who are going public via direct registration, like Spotify, or using traditional underwriters.  Call us at (949) 752-1100 or fill out our form here for a free consultation about your future IPO: https://bradshawlawgroup.com/location/contact/

The Securities Act of 1933 has the following liability provisions: Section 11(a) imposes liability “in…