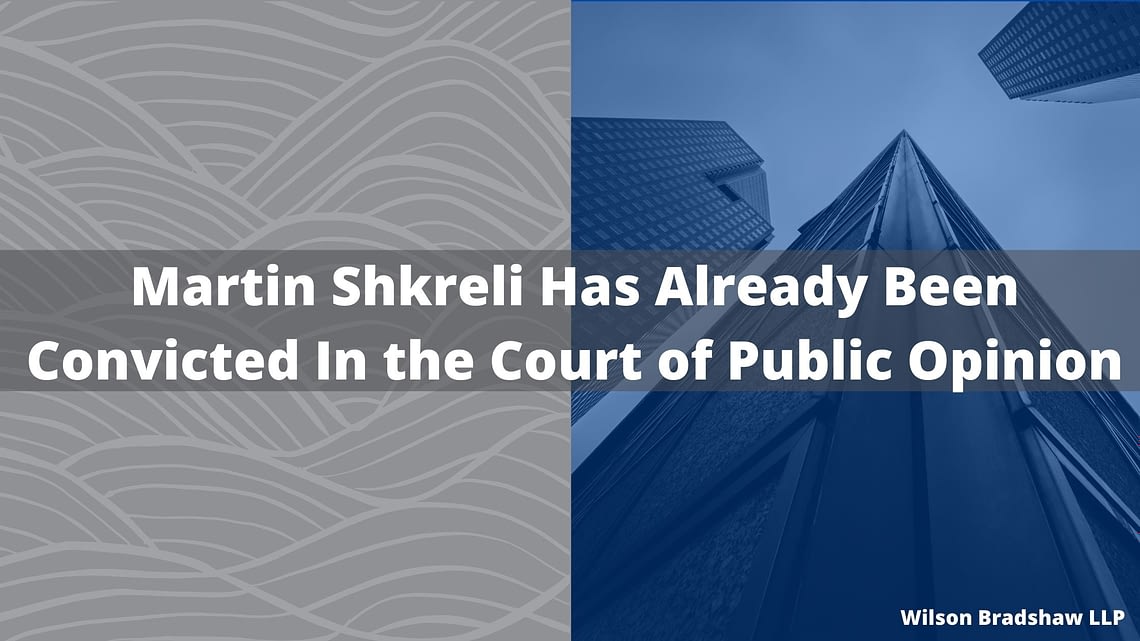 Martin Shkreli has been called many things since he became a household name: a “pharma bro,” a “capitalist cartoon villain,” and an assortment of four-letter words. The young CEO became famous after he drastically raised the price of a life-saving AIDS medication.

At a time of floating populist resentment towards the investor class, inviting public outrage is a highly suspect strategy for any CEO. Now, Shkreli faces an uphill battle to clear his name. Although he is innocent until proven guilty in the eyes of the courts, the court of public opinion has already ruled decisively against him. In a perfect world, juries would be completely impartial, but Shkreli’s securities lawyer will have to contend with the entrepreneurs history of controversial behavior. Or he would, had his lawyer not also been arrested.

The charges date back to Shkreli’s years running the failed hedge fund MSMB Capital Management and the pharmaceutical company Retrophin. Federal authorities allege that Shkreli paid back investors from MSMB Capital using Retrophin stocks and accounting tricks. If true, the allegations paint a picture of a brazen scheme to defraud investors, although Shkreli has called the charges “baseless.”

Under normal circumstances, a wealthy entrepreneur like Shkreli would hire a securities law firm like ours. While many business people already have corporate lawyers on retainer, federal authorities accused his lawyer of aiding the scheme to deceive investors.

Like his client, securities lawyer Evan Greebel is also losing badly in the court of public opinion. After his arrest, Greebel made headlines for asking and receiving the judge’s blessing to leave the country on a planned Cancún vacation. When facing such serious fraud charges, the best securities lawyers would normally advise keeping a low profile.

At a time when the SEC enforcement division is more aggressive than ever, the chances of a fraud scheme going undetected are slim, especially for someone that actively seeks out attention. Since he became famous for raising drug prices, Shkreli has courted controversy online and in the press.

In fiscal year 2014, the SEC brought 755 enforcement actions and received $4.1 billion in penalties, a record year for the agency. In total, the SEC charged 135 parties with reporting and disclosure violations and 80 people with insider trading.

Entrepreneurs looking to avoid running afoul of the SEC (and the public at large) should take care not to emulate Shkreli. His behavior as a CEO was at times baffling, and if true, the allegations against him suggest an indifference to corporate securities law that would be unusual for any CEO, let alone one determined to become a public figure. Already, he’s been ousted as CEO from several companies.

Remember: the best corporate lawyers help ensure you comply with the law in the first place, not avoid it altogether.  Contact Bradshaw Law Group by clicking this link: https://bradshawlawgroup.com/location/contact/

How a Corporation Issues Additional Shares As securities attorneys, we have assisted many corporations to…

Corporate Law is not a joke. Learn from Volkswagen’s mistakes and chose the right direction…